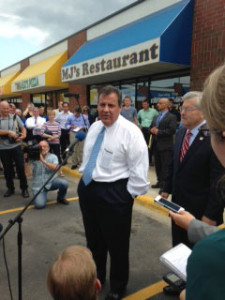 Christie shook hands with more than 200 curious Iowans who turned out to greet the potential Republican presidential candidate at a restaurant in Marion this afternoon, then Christie held a brief news conference in a parking lot. The final question: Are you conservative enough to win Iowa?

“They don’t go in there and say: ‘Are you conservative enough or are you liberal enough? Are you moderate enough?’ That’s not what people say,” Christie said. “They say: ‘Do I trust him? Can I count on him to tell me the truth? Is he somebody who can actually be a competant steward of our country’s future?’ That’s that way people judge, I think, who they’re going to vote for for president, for governor or for any other job.”

Christie is campaigning today alongside Iowa Governor Terry Branstad and started the day at a private fundraiser where according to a published report one of the people who paid 25-thousand dollars to hear Christie asked the New Jersey governor how he’ll recover from “bridgegate” — the intentional traffic jam one of Christie’s former aides ordered as political retribution against a local mayor. Reporters didn’t ask Christie about the controversy, but they did ask about the 2016 presidential race and Christie said deciding to seek the White House would be an “intensely personal” decision.

Christie and Branstad are due to appear in Davenport this evening at a fundraiser for Branstad’s reelection campaign.