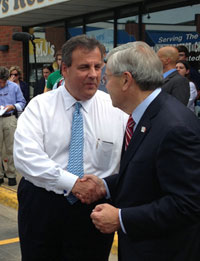 The chairman of the Republican Governors Association is defending the ads his group is running against Jack Hatch, the Democrat who’s running for governor. A reporter asked New Jersey Governor Chris Christie about the tone of the ads during a news conference yesterday in Marion, Iowa.

“We have an obligation to let the people know about the record of Governor Branstad’s opponent. He’s probably the only one who thinks its negative,” Christie said. “It’s truthful and, you know, If he’s unhappy with his record, he should have done something about it before he developed it.”

Hatch’s campaign manager uses the words “misleading” and “false” to describe the ads, which suggest Hatch may have conflicts of interest in his work as a property developer and long-time service as a state senator. Christie brushes the complaints aside.

Hatch’s campaign manager says Christie’s using “New Jersey-style politics” in the ads to help “bail out another legally and ethically challenged career politician.” Branstad and Christie campaigned together yesterday. Tickets to a private fundraiser in the morning for the Republican Governors Association cost $25,000 each.