You are here: Home / News / If Obama doesn’t act, Perry may ‘fill the void’ and send Texas National Guard to border (AUDIO) 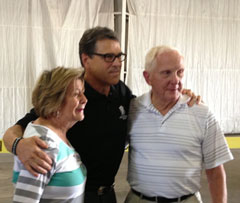 “I think we’ve sent the message that if we don’t get the satisfaction that the federal government’s going to move and move quickly, then the State of Texas will, in fact, fill that void and address this issue,” Perry said.

Iowa’s Republican Congressman Steve King, an outspoken critic of what he calls “amnesty” for undocumented immigrants, has called upon the governors of the four southern states that border Mexico to act on their own to send National Guard troops to secure the area. Perry, who discussed the issue with King Saturday night, said he first asked President Obama to send National Guard troops to the border in 2009.

“Securing that border with Mexico is not a Republican issue and it’s not a Democrat issue,” Perry said. “It’s an American issue and, hopefully, Washington and particularly the administration who has the ability to , unilaterally move pretty quick on this, if they would, but again, if they don’t, the citizens of Texas expect us to keep them safe and secure.”

AUDIO of Perry’s remarks & interaction with guests at VFW in Clear Lake, 25:00

“If the federal government does not do its constitutional duty to secure the southern border of the United States, the State of Texas will do it,” Perry said, as members of the audience rose to their feet in an ovation. “That is my promise to you. That is my pledge.”

Perry told both audiences that since the fall of 2008, illegal immigrants have committed 642,000 criminal acts in Texas, including 3000 homicides and more than 8000 sexual assaults.

“That’s why that border has to be secured, from my standpoint,” Perry said.

Perry told reporters after his luncheon meeting that the Obama Administration “has had plenty of time to respond,” but Perry didn’t reveal his own deadline for his own decision about ordering Texas National Guard troops to the border if the president doesn’t. Perry was asked about the border issue by one of the veterans who attended the luncheon in Clear Lake. Alan Atwood of Clear Lake, another veteran in the room, supported Perry in the 2012 Iowa Caucuses and Atwell hopes Perry runs again in 2016.

“Love the job he’s done as governor of Texas, hiring people from all over the United States, created a lot of jobs,” he said. “I think he’d make a great president.”

Jack Davis of Clear Lake is another Perry backer from 2012 who’d like to see Perry make another run for the White House.

“I think he speaks very straight,” he said. “I don’t think he runs around the bushes and I think he lays it out.”

Perry was the keynote speaker to a crowd of about 100 people who gathered for the GOP barbecue fundraiser at the Mason City Airport in Clear Lake late this afternoon. He touted all the Republican candidates on Iowa’s November ballot. Perry also referenced the video of Democratic U.S. Senate candidate Bruce Braley referring to Republican Senator Chuck Grassley as a farmer who could wind up as chair of the Senate Judiciary Committee if Democrats lose the senate. Perry took a black marker and wrote the word “farmer” across a Grassley poster on the wall.

Perry also became the latest in a string of Republican politicians who’ve posed for a photo with a campaign sign for Joni Ernst, the GOP candidate who is currently on two weeks of active duty with her Iowa National Guard unit. The photos are being tweeted on Ernst’s campaign Twitter account.

(This post was updated at 7:58 p.m. with additional information.)