You are here: Home / News / Rare fish discovered near Muscatine 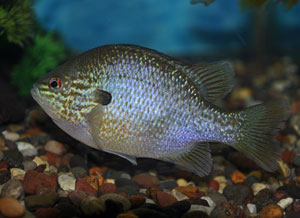 Iowa Department of Natural Resources biologists, who were collecting fish for a clinic earlier this month, made an unusual discovery. DNR spokesperson Kevin Baskins says they collected what’s believed to be a longear sunfish.

“That’s a fish we’ve not documented in Iowa for close to 80 years,” Baskins said. “It was back in the early 1930s that we last had a documented longear sunfish in Iowa.”

The small fish was collected by biologists who were surveying a pond near Muscatine that had been inundated earlier this summer by the Mississippi River. A clip of the fish’s fin has been sent to a lab in Missouri for DNA analysis. “First of all, to determine whether it’s purebred or if it’s some kind of hybrid of a longear sunfish. If it is a longear sunfish, there are some subcategories and we’re trying to determine what subcategory it might belong to,” Baskins said.

The fish is alive and being kept in an aquarium in a DNR fisheries facility. It’s unclear at this time what the DNR will do with the fish. “We’ll see what the (DNA) results are and then maybe determine whether it’s something we want to display,” Baskins said. The longear sunfish was once listed as common in bayous around Muscatine, but disappeared in the early 1930s, likely due to a loss of habitat.

Flooding this summer may be responsible for bringing the one fish back into the region. “We have locks and dams on our rivers that can prevent a lot of fish from moving up the river. When we get flooding situations, that allows some certain fish to move around those barriers that they would normally encounter. We think that might be one of the reasons why we’re seeing it pop into our state now,” Baskins said.