You are here: Home / News / Harkin hosts forum with focus on finding jobs for Americans with disabilities 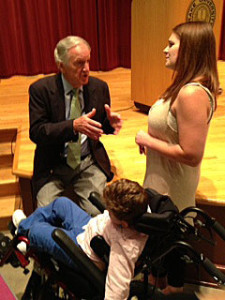 Senator Tom Harkin hosted a forum at Drake University late this afternoon to mark the 24th anniversary of the Americans with Disabilities Act, which was signed into law on July 26, 1990.

Governor Terry Branstad, who was among the panelists, said he tells business owners they will make their business better by making accommodations and hiring workers who have a disability.

“The people that we have with disabilities that work for the state tend to have better attendance, they’re very conscientious and they make great employees,” Branstad said.

Senator Harkin said his own brother, Frank — who was deaf, only missed three days of work during the 23 years Frank worked at a factory making jet engine parts.

“It was a noisy place. His boss, Frank’s boss, the foreman comes and says: ‘This is the best worker I’ve got. He never makes a mistake. He’s always here on time. Gets more parts done per hour than anybody else.’ And he finally figured it out. He didn’t hear all the noise and stuff. He just kept right on working. Nothing bothered him,” Harkin said. “…That’s why I say sometimes people with disabilities can out-perform.”

Steve Bartlett, the former mayor of Dallas, is also a former member of the U.S. House of Representatives who helped round up votes for the Americans with Disabilities Act from his fellow Republicans. He was among the panelists who addressed the issue.

“We’re still behind on employment, so we still have to find some ways to break those barriers to that the reasonable accommodations are much more easily identified and accessible going forward,” Bartlett said.

According to the U.S. Department of Labor, about 20 percent of adults who have a physical or intellectual disability are working. The unemployment rate among disabled Americans is more than double the unemployment rate for the entire worforce. Kelly Buckland of Idaho, a national leader on disability issues who was on the panel, told the crowd the Social Security Disability system needs to change.

“We still have a completely outdated benefit system where we pay people to not work and we penalize them if they do go to work,” Buckland said. “…We’re tired of living in poverty. We’re tired of being unemployed.”

Michele Meadows of Des Moines, Miss Wheelchair Iowa, told the crowd she’s become an advocate for finding better transportation solutions, so people like her can get to work.

“I realized that when I had the accident three years ago that I had a lot of work to do educating people around me,” Meadows said. “I did not have a color of my skin. I did not have a slant in my eye. All I had was a wheelchair and everybody running to the other side of the sidewalk. I realized that my civil right’s movement better start with my mouth.”

Today’s event was organized by the Harkin Institute for Public Policy and Citizen Engagement at Drake University.