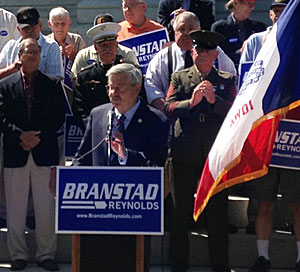 Republican Governor Terry Branstad says he may unveil more proposals to benefit veterans in the coming months, but he first wants to ensure a new law that took effect this year is working effectively.

Branstad made his comments this morning at an event touting the “veterans coalition” that is supporting his bid for reelection this November.

“I am really proud to say that Iowa has become a lot more veteran friendly,” Branstad said.

The “Home Base Iowa” bill Branstad signed into law on Memorial Day eliminated state income taxes on military pensions, plus the new law calls for state licensing boards to give veterans credit for the skills they acquired in the military. Branstad said he wants to ensure veterans do not have to take courses with content they mastered during their military service if they’re enrolled at an Iowa community college or one of the state-funded universities.

“We want to make sure that veterans are getting credit for their military education and training at our colleges and universities,” Branstad said.

State Representative Guy Vander Linden, a Republican from Oskaloosa who is a retired Marine brigadier general, said Branstad recognizes “the value” of bringing retired soldiers back to Iowa.

“When we don’t have any bases or any hospitals to welcome them home, it’s important that we have some other incentives to bring them back here,” Vander Linden said during today’s news conference. “We’re talking about many people who are 40 years of age or younger even, with young families who want to come back to Iowa and bring their skills with them.”

Vander Linden’s name is on the list of more than 250 Iowa veterans who’ve signed onto the “Veterans for Branstad” group. Vander Linden and Branstad spoke today at a news conference staged beside the “Soldiers and Sailors” monument on the Iowa capitol grounds.