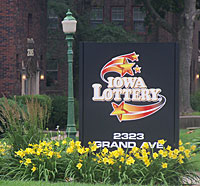 You can buy everything from a corn dog to a tractor at the Iowa State Fair, but this year one thing you won’t be able to buy is a lottery ticket.

“We’ve always been proud of the Iowa State Fair and the Lottery’s presence at the fair. This year we decided to not actually sell tickets at the Varied Industries building,” Iowa Lottery CEO Terry Rich says. “We are going to sponsor the first day and quite a few who come in on the first day, the opening day, we are going to be giving away free tickets to those 21 and overs.”

Rich says sponsoring the opening day of the fair is a new way to promote the organization. “What we decided was to find a different presence, just like we change up tickets, we are looking for different marketing and promotional ways to spread the word about the Iowa Lottery,” according to Rich.

He says introducing people to games at the fair isn’t as important as it once was. “The state fair was a really good place for us to have people sample tickets and we could explain how tickets played,” Rich says, “but with today’s technology and the internet…it has become much easier for people to find out how to play.”

Rich says the upcoming move from their headquarters at the edge of downtown Des Moines to a western suburb also had an impact on the decision. He says they were in the middle of getting the office move together last January when they needed to make a decision on selling tickets at the fair. “That definitely played into our reason to look for a new and exciting way to co-promote with the Iowa State Fair,” according to Rich.

You won’t be able to purchase a ticket on the fair grounds, but Rich says there will still be plenty of chances to get a ticket near the fairgrounds. “All of the convenience stores around the state fair as you heading in or out will have the tickets obviously, as well just around the corner in your own local town.’ Rich says. An Iowa Lottery spokeperson says they’ve had a presence off and on at the fair through the years, but have been selling tickets for at least the last 10 years. The Iowa State Fair opens Thursday.