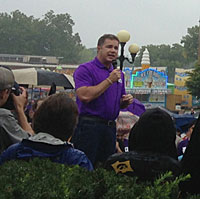 Bruce Braley, the Iowa Democratic Party’s candidate for the U.S. Senate, presented himself as a uniter rather than a divider as he addressed a crowd at the Iowa State Fair this morning.

“In this election, there are going to be clear choices for Iowa voters between someone who’s going to continue to work across party aisles to try to bring people together,” Braley said, “…or someone who supports a Tea Party agenda that’s going to stand in the way of progress for Iowa.”

Braley did not mention Joni Ernst, his Republican opponent, by name, but repeatedly referred to Ernst as “she” and “my opponent.”

“If you want to send somebody to Washington like me with a proven record of working with Republicans to solve tough problems and help Iowans, you need to get out the word to vote for Bruce Braley, but if you think that someone who has an agenda that drives people apart and supports a Tea Party agenda that’s wrong for progress in Iowa, then they should vote for my opponent,” Braley said. “The choices couldn’t be more clear.”

Braley made his comments during a speech on The Des Moines Register’s “Soapbox” on the fairgrounds as a light drizzle fell.

Hecklers have disrupted the speeches of other politicians who’ve spoken on the spot in the past, but Braley’s eight-minute speech went uninterrupted. There was a man dressed as a chicken there, however, to bring attention to Braley’s dispute with a neighbor over her chickens which roved on Braley’s Holiday Lake vacation home property. The Republican Party of Iowa also handed out small rubber chickens to publicized the website they’re created to highlight the topic.

Ernst is scheduled to speak at the Fair tomorrow.