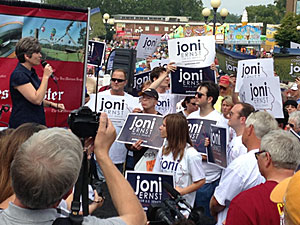 U.S. Senate candidate Joni Ernst delivered what she billed as “not a campaign political speech” at the Iowa State Fair today.

During an appearance on The Des Moines Register’s “Soapbox”, Ernst talked about her service in the Iowa National Guard and she paid tribute to a soldier from her home area in southwest Iowa who was killed in Iraq.

“I am going to take my time on this Soapbox to talk about something that I feel is very, very important…those brave men and women who serve in our armed forces,” Ernst said.

Ernst did not mention her opponent, Democrat Bruce Braley, or the ads criticizing Braley for missing over three-quarters of the House Veterans Affairs Committee hearings when Braley served on the panel, but Ernst made a short reference to the scandals engulfing the Veterans Administration.

Two people dressed as ears of corn were in the crowd surrounding Ernst to call attention to questions Democrats have raised about Ernst’s support for ethanol. There were other protestors promoting other causes, like gun control, but none of the protestors disrupted her speech. Carol Hunter, the Des Moines Register’s executive news director, made this announcement to the crowd just before introducing Ernst: “Let’s have civil discourse here. Let’s let each of the speakers have their say.”

Ernst began her day on the fairgrounds with a news conference alongside other Republican elected officials to tout the federal mandate for yearly ethanol production. The Renewable Fuels Standard for 2014 is in limbo as federal officials consider scaling it back.

“I have had a 100 percent voting record supporting RFS in the Iowa state Senate,” Ernst said. “Not only have I supported it legislatively, but I have been an advocate for RFS.”

Ernst said during the primary season that she is philosophically opposed to all tax credits for selected industries, including the one for ethanol, but would support keeping it until the playing field is leveled and all tax credits are ended. Democrats have questioned whether Ernst has promised her campaign contributors from the oil industry that she would vote to do away with the Renewable Fuels Standard if she’s elected to the U.S. Senate.

“I’m just going to say that most of the attacks out there are blatantly false,” Ernst told reporters. “They are distractions from my actual record on where I stand on the RFS.”

Republican Governor Terry Branstad jumped to her defense, saying he “resents” the ads running against Ernst, questioning her fidelity to ethanol.

Ernst is spending part of her day at the State Fair with the father of Jamie Kearney, a soldier from Emerson, Iowa, who was killed in Afghanistan in 2004. Kearney was the first Iowa soldier killed in the line of duty during the war in Afghanistan.