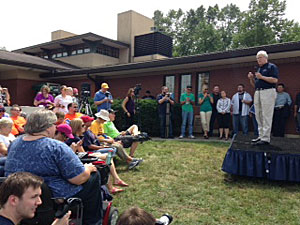 Jack Hatch, the Democratic candidate for governor, is revealing that he is dyslexic, but Hatch says it has motivated him to be more creative and more determined to succeed.

Hatch says his mother was a teacher who knew something was wrong in the 1950s and ’60s when Hatch was a boy, but the condition wasn’t widely recognized.

“In third grade, I was still reading first grade books and I had trouble reading throughout my whole career in education. She knew something was wrong. She and dad kept on reading to me. I was tutored, went to summer school,” Hatch says. “She called it perceptionally handicapped, but all the time she worked with me and that challenge was eventually overcome, but you know it today as dyslexia.”

Experts say up to 20 percent of the U.S. population has some form of dyslexia. Hatch says one reason he came from Connecticut to Iowa is because his mother wanted him to attend a small Midwestern university where he would have smaller classes. Hatch stayed in Des Moines after graduating from Drake University and he’s served in the state legislature for over two decades. Hatch says one reason he supports state-funded preschool is because of his childhood experience.

“It’s really because I’m a product of early intervention and being a person that had an educator for a mother, I could tell you with absolutely certainty that if it wasn’t for that early intervention I wouldn’t be ahead of you or in front of you as a Democratic candidate for governor,” Hatch says.

Hatch is critical of his opponent, Republican Governor Terry Branstad, for proposing an end to universal, state-funded preschool in 2011. Hatch made his comments during a speech on the State Fair “Soapbox” sponsored by The Des Moines Register.