You are here: Home / News / Perry blasts Obama for ‘not leading from the front’ (AUDIO) 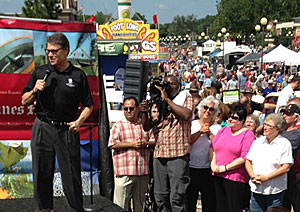 Speaking at the Iowa State Fair today, Texas Governor Rick Perry accused President Obama of committing a series of “foreign policy debacles” and putting the country at risk by decisions that “hollow out” the military.

“Whether it’s in Libya, in Egypt, In Israel, in Syria, Ukraine and now what we’re seeing back in Iraq with ISIS, America not leading from the front,” Perry said. “As a matter of fact in some of these places America not leading at all and I think it’s time for some real change in Washington, D.C. ”

Perry, a former Air Force pilot, faulted Obama for failing to follow through on his warning to Syria in 2012, about the use of chemical weapons in that country’s civil war.

“When a red line is drawn, that red line needs to mean something in the world,” Perry said, to applause from the crowd. “It needs to mean that America’s going to stand with her allies and the enemies need to fear what we’re about.” 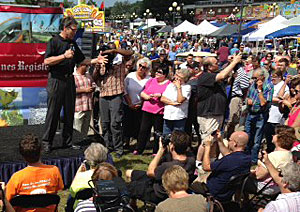 Rick Perry talks to the crowd.

Perry is wrapping up a four-day trek through the state of Iowa that started Saturday with a speech to a large gathering of Christian conservatives. He’s held a series of fundraisers for Republican candidates in Iowa and Perry made a pitch during his speech for several GOP candidates, including Senate candidate Joni Ernst.

“Iowa can play a very important role in the trajectory that this country goes in,” Perry said.

Perry, wearing a black shirt and black jeans as he strolled around the fairgrounds in Des Moines, joked that it “has been a relief” to be out of the Texas heat for the past few days. It was 91 degrees in Austin at high noon today. Perry ran for president in 2012 and has said he is considering another bid for the White House in 2016.