You are here: Home / Human Interest / Iowa native has homecoming with “Evita” performance 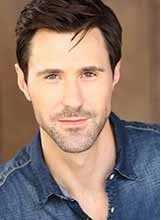 The nationally-touring Broadway production of “Evita” is making one stop in the state this week and an Iowa native is playing a key role.

Thirty-two-year-old Christopher Johnstone grew up in Cedar Rapids and now has homes in New York City and Los Angeles, although he doesn’t see either one very frequently as the show is constantly on the move.

“We’ve been on tour for over a year now so it’s almost every week,” Johnstone says. “We have Mondays off which is sometimes a travel day, so, it can be a long time of not seeing your actual home.”

Not that he’s complaining.

Johnstone says “Evita” is a “dream show” for him as he’s been a big fan since he was about 13. That’s when he first saw the 1996 film that starred Madonna in the title role.

“I remember listening to the soundtrack and thinking it was so cool, being able to listen to something I saw in the movie and famous actors and for some reason, I just really took to it,” Johnstone says. “I loved the story, loved the music and would just sing all the lyrics to every single song.”

Almost 20 years later, the production is hitting major cities across the U.S. and will only be in Iowa for three nights. It’s a brief but welcome homecoming for the actor and singer.

“We’ve been on tour for over a year and we didn’t hit Des Moines so I was like, c’mon, guys, see if you can book it, and thankfully they did,” Johnstone says. “There will be a lot of friends and family coming from Cedar Rapids and from around the state so that’ll be nice.”

The musical focuses on Eva Perón, who used her beauty and charisma to rise meteorically from the slums of Argentina to the presidential mansion as First Lady. Johnstone says it’s a thrill to be in the production.

“It’s something you’re proud to be a part of,” Johnstone says. “We’ve been hitting amazing cities, playing amazing theaters and the reception has been great. When you’re a part of something that’s so successful, it makes it enjoyable to go to work every day.”

The character he plays is named Magaldi and without giving away too much, he says, “It’s a lot of fun to be a bad guy.”

The Tony Award-winning musical makes its debut at the Des Moines Civic Center on Thursday and runs through Saturday. For details, visit: www.desmoinesperformingarts.org