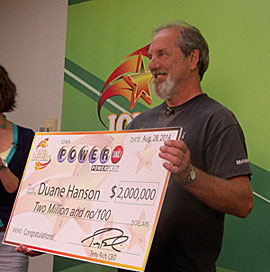 A northern Iowa man who won a $2 million Powerball prize in Wednesday’s drawing picked up the prize at Iowa Lottery headquarters in Des Moines.

Fifty-eight-year-old Duane Hanson of Osage says he checked the ticket this morning. He says he called the Iowa Lottery phone line and found out he had five numbers right and then checked his computer and found out he’d won two million dollars.

Hanson then got his daughter and went in and swiped the ticket on the self-checking machine at the Casey’s store where he bought the ticket and confirmed it was a winner.

Hanson left straight from Osage to Des Moines after calling work and telling them he had won. He didn’t tell the store he had a winning ticket and expects to hear from a lot of people after he returns. “I’m thinking my phone will probably be blowing up probably,” Hanson said and laughed. “Probably find out I have a lot more friends than I thought I did.”

Hanson works for the Cedar River Railroad in Waterloo and doesn’t yet have any major plans for the money. “I’m not sure right now. I can retire in a year and I always planned on buying an acreage when I retired . So maybe I will buy an acreage a little quicker I guess,” Hanson says. “Other than that, I am just going to save it and then decide what I want to do I guess.”

The numbers drawn were 17-24-26-45-46, with the Powerball number being 19. Nobody won the jackpot in last night’s drawing, so the big prize will go up to an estimated $90 million for Saturday’s drawing.