You are here: Home / Human Interest / Iowa priest returns from bicycle ride across the U.S. 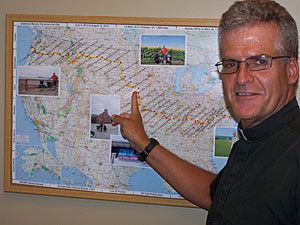 A Catholic priest from northwest Iowa man is back at home after spending most of his summer bicycling across the United States.

Father Kevin Richter of the St. Joseph Catholic Church in Le Mars rode 3,836 miles as he crossed 14 states in 68 days. “The most miles I covered in a day was from Bismark, North Dakota down to Selby, South Dakota,” Richter said. “With a good tail wind behind me, I rode 120 miles that day.”

He averaged 68.5 miles a day. Richter said, during the toughest stretch of the trip, he covered only 28 miles on one day through the Appalachian Mountains.

“For half of Kentucky and half of Virginia, you just keep going up hills and down hills,” Richter said. “That gets weary after a while and nearly broke me at one point.”

Richter divided his journey into two halves, traveling east from Le Mars to Yorktown, Virginia. From there, he flew to Portland, Oregon and rode his bike back to Le Mars. Oddly enough, Richter said the worst weather he rode through was in Iowa, on June 9. “The day I left, when I was riding between Lawton and Bronson, it was raining hard. I think that was it,” Richter said.

Richter took a summer sabbatical to make the trip. On many nights, he either camped out under the stars or slept in motels. On a few occasions, he would spend the evening at a church or with host families. Richter made the journey by himself, had 13 flat tires, and lost 25 pounds.