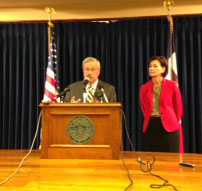 Governor Terry Branstad says he was surprised a state audit has revealed a key state agency failed to find all the settlements with former state employees that included confidentiality clauses.

“Unfortunately they did not have a good tracking system and my staff went on the information they were supplied and it wasn’t adequate and that’s the thing we are committed to correcting,” Branstad says.

“Unfortunately, the Department of Administrative Services in the past has not had an electronic tracking system and that’s the reason why it was not discovered previously,” Branstad said.

Branstad told reporters the director of the Department of Administrative Services is now working with the state auditor to set up a tracking system.

“I’m pleased that the auditor’s report also showed that the action that I took with the executive order has ended the use of confidentiality clauses in settlement agreements and that the agencies are abiding by the responsibility to have all of these agreements reviewed by the attorney general’s office and approved by the director of the department and the Department of Administrative Services,” Branstad said.

Branstad asked legislators to make all state personnel files public records. State Senator Matt McCoy, a Democrat from Des Moines who works in human resources, says private businesses do not disclose that kind of information because of the liability and Branstad’s proposal would open the state up to lawsuits.