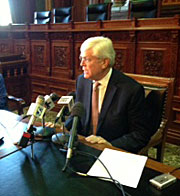 Jack Hatch, the Democratic candidate for governor, says Repulican Governor Terry Branstad has taken “zero responsibility” for mistakes in his administration and that can’t be papered over by Branstad’s barrage of campaign advertising.

“The governor can spend all that he wants, but you can’t buy back integriy,” Hatch said this morning during a statehouse news conference.

“After almost $3 million of advertisement, this governor is still only 11 points ahead of me,” Hatch said, “so this campaign is not over.”

Hatch said Iowans “are suspicious” of what Hatch calls the “fake numbers” Branstad’s administration is presenting about how many new jobs have been created in Iowa and how much personal incomes have grown. Next week Hatch plans to start airing his own ads, which Hatch said are sprinkled with humor but will focus on Branstad’s management of state government.

“The abuse of power, the mismanagement of our resources has been to a level never seen before in this state,” Hatch said.

Hatch will he’ll also talk in the ads about his vision for the state’s future, including “clean water” initiatives and a new economic development approach.

Last week the chairman of the Iowa Republican Party accused Hatch of killing a bill about tax credits for developers that may have reduced Hatch’s income as a property developer. Hatch called it a “desperate” attack that ignores the political reality of the legislature.

“The Republicans are reaching deep into the recesses (for) a minority bill that joined 80-90 percent of the bills introduced into the state senate and not getting through a committee,” Hatch said.

In other campaign news, political action committees representing the Iowa Association of Business and Industry and the Iowa Corn Growers Association have endorsed Branstad’s bid for a sixth term. The Iowa Corn PAC has also endorsed Democrat Bruce Braley in the U.S. Senate race, along with Republican Congressman Steve King and Democratic Congressman Dave Loebsack. The group is backing Democrat Pat Murphy in Iowa’s first district race and Republican David Young in the third congressional district.