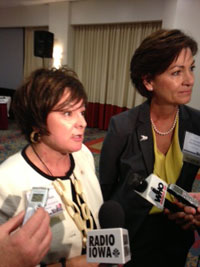 “We’ve seen some slow down of that direct foreign investment for the last several years,” Durham said during a question-and-answer session with Iowa reporters covering the event. “But certainly with the Valent opening, we’re seeing that return.”

“Actually, we are pitching specifics,” Durham told reporters. “I mean, obviously, any time we host a company we make the value proposition of why it makes sense to expand in Iowa and really play upon those things — the natural resources that we have here, the workforce that we have here.”

Yuzaburo Mogi, the honorary CEO of Kikkoman Corporation, is co-chairman of the Midwest U.S. – Japan Association and he said “business sentiment” in Japan has improved because the Japanese economy has “stabilized.”

“Those of us from Japan know the benefit of investing in the Midwest,” Mogi said during an opening speech at the conference. “…We hope this joint meeting will help us identify and develop business opportunities for all of us.”

Iowa has not hosted the association’s annual meeting since 1995. At this year’s event, Iowa’s governor signed memorandums of understanding with officials from Iowa’s “sister tate” in Japan that will expand educational relationshps between colleges in the Yamanshi Prefecture and in Iowa, plus the agreements set up exchanges among young professionals in Iowa and Japan.

There was a “gala dinner” last night at the Iowa Events Center. The executive in charge of Ajinomoto’s North America Division was the featured speaker. Ajinomoto — which means “the essense of taste” in Japanese — operates a plant in Eddyville, Iowa. The Midwest U.S. – Japan Association meeting concludes midday today.