You are here: Home / Crime / Courts / Historian searches for relatives of those involved in ‘Bellevue War’ 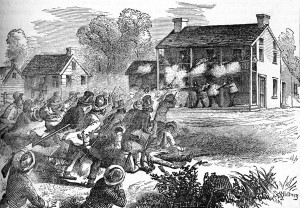 Six years before Iowa became a state, there was a wild west-style gunbattle on Main Street in what’s now the eastern Iowa town of Bellevue along the Mississippi River.

Town historian Susan Lucke is searching for people whose relatives may have been involved in the bloody skirmish, what became known as the Bellevue War. Lucke says a gang of outlaws had holed up in the town’s hotel and the residents banded together to try and run them out of town.

“They confronted them on April 1st, 1840, and the sheriff tried to get them to surrender,” Lucke says. “They took the sheriff hostage. (Wiliam) Brown, the alleged outlaw leader, actually let him go. That was the third time he’d saved his life. Then, they marched on the hotel and they shot it out.”

As many as 100 people were involved in the gun fight. Several people were killed or wounded and the vigilantes were able to round up most of the outlaws, wanted for murder, counterfeiting, rustling and robbery in cases across the Midwest. Lucke says some residents of the frontier town wanted to hang the crooks.

“The actually maintained a noble attitude,” Lucke says. “They had people that wanted vengeance, but they really did try and took a vote of red and white beans and by three beans, they decided to go with the traditional method. They whipped them, put them on a raft and sent them downriver.”

She says most of the outlaws never returned, though a few of them were tied to the murder of Davenport’s founder, Colonel George Davenport, in his home just downriver in 1845. Bellevue leaders are planning to mark the 175th anniversary of the gunfight next summer, in August of 2015. Lucke says it won’t be a celebration, but more of an observance, with a chance to exchange family stories and learn about history.

A reinactment of the shoot-out is also planned. “We’re hearing from people who actually know their ancestors were in this confrontation,” Lucke says. “This would probably be a story that, in some way, was passed along. Just this morning, I had an email from a lady in Arkansas whose great-great-grandfather was a blacksmith, partner of the blacksmith killed in the Bellevue War and she said he fought in the battle.”

Lucke says the Bellevue War drew national attention, set precedents in frontier justice and ignited more than a century of controversy, as the case is still a subject of study in law schools. Lucke has written a book on the incident: “The Bellevue War: Mandate of Justice or Murder by Mob?” If you think you might be related to any of the parties involved, the vigilantes, the sheriff or the outlaws, contact Lucke at: [email protected]