You are here: Home / News / Audit finds 3 employees paid by Secretary of State after leaving jobs 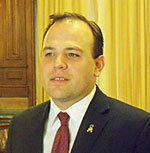 A report released today by the State Auditor’s office shows Iowa Secretary of State Matt Schultz allowed three political appointees to remain on the state payroll after they left their jobs. The audit was requested by Senator Liz Mathis, a Democrat, after reports surfaced that Schultz allowed his chief deputy, Jim Gibbons, to collect a paycheck for six months after his job was eliminated in 2012.

Chief Deputy Auditor Warren Jenkins says,while reviewing the Gibbons case, he found two more instances where appointees were paid after they resigned. The audit shows Schultz’s office paid roughly $110,000 to those three appointees after their last day of employment.

In addition, Jenkins says he could not determine what, if any, work the appointees did that would qualify them to remain on the payroll. “We looked at what documentation was available regarding work accomplishments and found there was basically very little written information as to what was accomplished,” Jenkins says.

Schultz, a Republican, is not seeking reelection as Secretary of State and is instead running for the office of Madison County Attorney. It’s unclear if the $110,000 will be returned to the state. “I would not anticipate it would be returned unless somebody, such as the legislature or somebody else, would initiate action to try and recover it,” Jenkins says. “The difficulty would be trying to determine how much the amount should be because we could not determine what was accomplished for that amount of money.”

Jim Gibbons was the wrestling coach at Iowa State University from 1986 to 1992. Gibbons was hired as chief deputy by Schultz in 2011 following an unsuccessful bid as a Republican congressional candidate.

Schultz issued a brief statement in response to Jenkins’ report, saying “There is nothing new here. What I have consistently maintained is that I acted on the advice of DAS, which was shown by the State Auditor’s office. The restructuring of the office saved the taxpayers over a quarter of a million dollars and those savings can continue in the future.”

Mary Mosiman, now the state auditor, took over Gibbons’ duties in the Secretary of State’s office after he was let go in May 2012. Jenkins’ report found Mosiman received $2,500 in excess vacation pay when she was Schultz’s deputy. Jenkins says Mosiman was unaware of the erroneous pay and has already reimbursed the state. She was appointed state auditor by Governor Branstad last year.

Statement from Senator Liz Mathis, co-chair of the Administration and Regulation Budget Subcommittee:

“During the 2014 session, it took repeated phone calls and emails by legislators to get Secretary of State Matt Schultz to answer basic questions about how he was spending taxpayer dollars. Now we know why he was not eager to answer questions about his potential misuse of public funds. An audit released today confirmed that Schultz handed out a six-figure salary to an employee who simply wasn’t working. This is a disgraceful example of favoritism and a misuse of the powers of the office of Secretary of State. It also proves again that Schultz is a poor manager who lacked the experience to oversee the Secretary of State’s office in a responsible way. Last December, the State Auditor raised serious questions about whether Schultz had misused more than $240,000 of federal funds on fruitless criminal investigations of Iowa voters. The audit released today shows Schultz misspent another $113,000 of taxpayer funds. And this may not be the last we hear about Schultz’s misuse and mismanagement. Today, I renew my call for Secretary Schultz to apologize to Iowa taxpayers for this misuse of public money.”

“The Auditor’s report released today detailing the incredible mismanagement of the Secretary of State’s office under Secretary Matt Schultz is troubling and should concern all Iowa taxpayers. Iowa taxpayers deserve a Secretary of State who will do the job of Secretary of State rather than chase headlines and keep political cronies on the payroll without requiring them to show up for work. Iowans value work and have no tolerance no-show political appointees, especially at a time when our local election officials face tight budgets and struggle to pay for updated voting equipment. While my opponent in the Secretary of State’s race (Paul Pate) says he wants to ‘continue Secretary Schultz’s good stewardship of the office,’ I believe the time has come for new, fiscally responsible leadership in the office. I urge all the candidates in the Secretary of State’s race to join me and call on the no-show employees identified in the audit to either immediately document their work or return the salary they were paid to the general fund.”