You are here: Home / News / $1.9 million in state money for parks to three NE Iowa counties 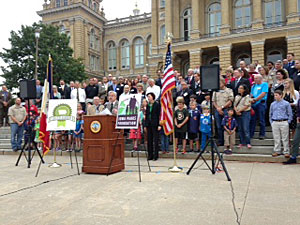 Larry “Buck” Koos of Lamont is a Jackson County Supervisor and he says there’s a “regional plan” that involves raising up to $4 million locally in cash, services or land for the effort.

“We have some land that was just donated to the conservation department,” Koos says. “It’s just right close to Maquoketa, so that’ll be in the works.”

Some of the money is likely to be used to build new cabins at the four state parks which are located in those counties, but a new state park may also be developed. Whitewater Canyon is currently a county-managed wildlife area.

“It touches all three counties, so that’s exciting,” Koos says. “It’s a beautiful place. It’s not real well known yet, so there’s just endless opportunities out there.”

The award of $1.9 million in state money for the three counties was announced this morning (Monday) during a news conference on the steps of the statehouse. Joe Gunderson of the Iowa Parks Foundation says the grants aren’t just for state-owned facilities.

“In Iowa, the county conservation system has twice the public land area that the state park system does, so it’s critical to the movement,” Gunderson says.

Republican Governor Terry Branstad formed the Iowa Parks Foundation a few years ago with former Congressman Neil Smith, a Democrat from Des Moines. The public-private partnership was created to plan a celebration of the 100th anniversary of the state park system in 2020. Branstad says it may take a few decades to complete the effort to spruce up the parks.