You are here: Home / News / Group protests outside Governor’s meeting on water quality 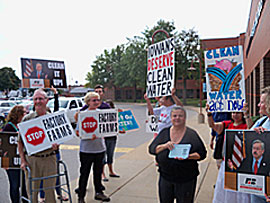 Around one dozen members of the group “Iowa Citizens for Community Improvement Action Fund” gathered outside the office of the Association for Business and Industry Monday where the governor was set to hold meetings with what he calls “stakeholders” to talk about clean water issues.

Group member, Deborah Bunka of Ames, says not enough is being done to protect Iowa’s waters.

Bunka says the group wants 4 things. “Number one, every factory farm in Iowa to get a Clean Water Act Permit and a ‘three strikes and you’re out rule; number two, DNR inspections that find problems and fix problems; number three, tough fines and penalties that deter future pollution; number four, adopt the EPA’s waters of the U.S. rule so that more bodies of water are covered under the Clean Water Act,” Bunka says. 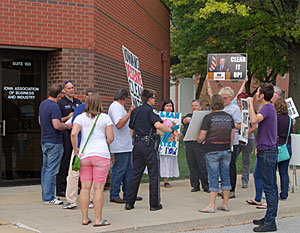 Brenda Brink, a CCI Action member from Huxley, says they should have been invited to the meeting.

“It’s time for Iowans to be included as stakeholders because we have too many impaired waterways, we have a crisis with our lakes, we have people who depend on lakes and rivers for recreation, and we can’t get into the stakeholder meeting,” Brink says.

“We need meaningful rules, and we want to know, the stakeholders out here want to know, is he going to be cleaning it up, or is he going to be the dirty water governor,” Brink says. A few minutes after Bunka and Brink spoke, Des Moines police arrived and asked them to move away from the front of the building. Officers told them they could make their statement, but had to do so in a public area and not on private property.