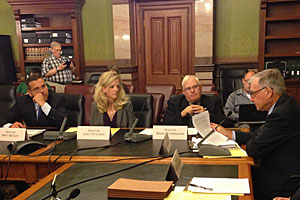 Democrats on the Iowa Senate’s Oversight Committee have endorsed a series of recommendations they say will “clean up state government.” Republicans on the panel accuse Democrats of engaging in “political theater” to try to discredit Republican Governor Terry Branstad.

Senator Janet Petersen, a Democrat from Des Moines who is chairwoman of the committee, said the recommendations are the culmination of public hearings over the past several months.

“These reforms are intended to fix underlying problems in state government,” Petersen said, “problems which if not addressed could damage the effectiveness of state government and leave the door open to similar scandals in future Democratic or Republican administrations.”

“No laws were broken. No codes of ethics were violated,” Garrett said. “Instead, we have discovered that there is a difference of opinion in management philosophies…and we have learned that sometimes front-line workers don’t care for or particularly agree with their bosses.”

Senate Democrats are proposing spending millions to “update or replace” the current call-in system for filing unemployment claims. A computer glitch this past spring led the state to issue checks to Iowans who weren’t eligible for unemployment. Democrats are also proposing new protections for “whistleblowers” in state government. Garrett said the list of recommendations is a “campaign gimmick.”

“Senate Democrats have shown no proof of the allegations they’ve made,” Garrett said. “The truth is Iowa’s being run exceptionally well by Governor Branstad and Democrats are simply trying to tear him down for political gain.”

After the committee’s 20-minute meeting, Petersen responded to Garrett’s accusation.

“That’s just a bunch of baloney,” Petersen told reporters. “I believe Iowans deserve clean government and we told them we would go looking for answers and they were not the same (as) Governor Branstad and his secret investigation team uncovered.”

Republicans say the Democrats’ investigation into Branstad Administration activities has cost taxpayers $100,000. Democrats say that’s how much Department of Administrative Services staff say had to be spent to find and copy documents Democrats requested under Freedom of Information rules.

Both Democrats and Republicans say if they win majority control of the state senate in November, they’ll pass bills next year to respond to some of the issues raised during the past six months.