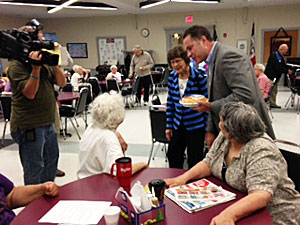 Bruce Braley & his mother visit with residents of a Des Moines senior center.

Democratic U.S. Senate candidate Bruce Braley spoke to a crowd of senior citizens today about “retirement security” — an issue Braley and his allies have raised often during his race against Republican Joni Ernst.

“I will never vote to privatize Social Security and turn your hard-earned money over to Wall Street investment bankers,” Braley said, to applause.

Ernst has said “privatizing” Social Security may be an option to consider for younger Americans and her comments have been featured in campaign commercials airing for the past several weeks. Ernst has countered with her own ad and she discussed the issue during a campaign stop in Sergeant Bluff yesterday.

“Our seniors rely on Social Security, so we can’t do anything that will change the benefits to today’s current seniors or those that are nearing retirement,” Ernst said. “We’ve made those promises and we need to keep those promises, but what we have to do is start talking about the different options that are available to preserve it for future generations like my children and grandchildren.”

Braley brought his elderly mother and the peach pie she baked to a senior center in Des Moines this morning to drive home his message on the issue.

“When it comes to protecting Social Security and Medicare, the most important person I have to worry about is sitting right there at that table,” Braley said.

Braley also brought along Tom Harkin, the Democrat Braley seeks to replace in the U.S. Senate. Harkin told reporters Braley has made the right corrections after some early “stumbles” but Harkin also credited Ernst for running a “really good campaign.” Later, Braley was asked to respond to Harkin’s assessment.

“I don’t know whether Senator Ernst regrets calling President Obama a dictator and saying that impeachment should be on the table. Only she can answer that,” Braley told reporters. “I’ve taken responsibility for things that I’ve said and I’ve tried to focus on the important issues that Iowans care about.”

According to Harkin, Braley can beat Ernst if he focuses on showing Iowans that he is “solid” and “grounded.” A Des Moines Register “Iowa Poll” taken last week showed Braley trailing Ernst by six points.

A spokesman for the Republican Party of Iowa issued a written statement, saying Braley “should offer an explanation for his own failed record in Washington rather than attacking his opponent in Iowa.” Ernst is in New York today, raising money for her campaign. Yesterday, during a campaign event in northwest Iowa, Ernst said the Register’s poll showed “momentum” for her campaign.

“I’d love to say I’m going to continue to pull ahead, but this is a race to the finish line,” Ernst said, “and we are going to continue pushing very, very hard to make sure we’re getting all of the voters out.”

Harkin told reporters today he’s not worried about Braley because at this stage in his first race for the U.S. Senate Harkin trailed Republican Roger Jepsen by nine points. Harkin wound up winning that 1984 race by nearly 12 points.