You are here: Home / News / Iowa store owner does deal with a Beatle for memorabilia 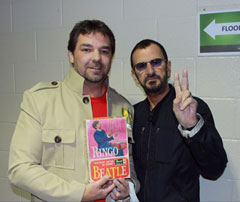 The owner of a record store in central Iowa sold a collectible from the Beatles to a Beatle over the weekend.

Rob Kuhn of Des Moines has been collecting Beatles memorabilia for 38 years. Last month, a relative of Beatles drummer Ringo Starr was in Kuhn’s store, Wayback Records, and sent pictures to Ringo of several items. “Ringo wanted a certain piece I had that he didn’t have and hadn’t seen in many, many years,” Kuhn said.

Rather than sell the item to Ringo, Kuhn asked if he could give it to him in person, in exchange for a photo and complimentary tickets to a show. Ringo agreed and the two met backstage at Starr’s show on Saturday night in Omaha.

Kuhn also met Paul McCartney backstage at a concert in Omaha back in 2005.