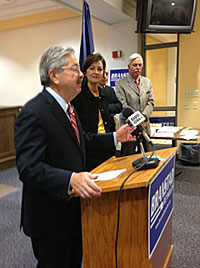 “Though we’ve been working hard to reduce the size and cost of state government and the state bureaucracy, it’s still a maze for a lot of Iowa citizens who want to find out an answer to a question or have a concern,” Branstad says. “We want to answer those questions quickly and accurately.”

Calls would be fielded by the new Iowa Public Information Board within 24 hours, according to the governor, and Branstad says he’ll expect whatever state agency may be involved to “acknowledge” the question within 48 hours.

“In this era of social media, there’s no reason why we in government who are public servants can’t respond in a timely way to the concerns of our constituents,” Branstad says.

Branstad says new “telecommunications options” will be used, so it won’t be necessary to hire more people to run the “accountability portal.” Branstad made his comments this morning during a campaign stop in Indianola. Branstad is seeking a sixth term as governor and he’ll be campaigning in Winterset and Adel today as well.

Jack Hatch, Branstad’s Democratic opponent, released a written statement, saying Branstad “has zero credibility on the issue of government openness and his proposal is laughable.”

Hatch said Branstad’s “portal” would route all complaints “back to the governor and the people who work for him” and allow Branstad to control “every piece of information that gets out” about state government.

“Iowa wouldn’t need a new transparency law if there hadn’t been a complete breakdown in government openness over the past four years,” Hatch said.

(This post was updated at 12:30 p.m. with additional information.)