You are here: Home / News / Romney back in Iowa to campaign with Ernst (AUDIO) 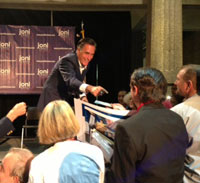 “She’s going to be an extraordinary breath of fresh air in Washington,” Romney said. “I can’t wait ’til she goes there and makes ’em squeal, can you? It’s going to be wonderful.”

Romney, of course, is referring to Ernst’s primary campaign ad in which she talked about her farm roots and castrating pigs.

Romney campaigned with Ernst in eastern Iowa on May30th, right after he endorsed Ernst as she was competing against five other Republicans for the party’s U.S. Senate nomination. On Sunday Romney was in central Iowa, headlining an Ernst campaign rally at the Iowa Farm Bureau heaadquarters in West Des Moines. Both Ernst and Romney referred to remarks President Obama made last week about this year’s election.

“(Obama) said in this race that his policies are on the ballot,” Romnney said. “but Iowa voted for President Obama twice, but Iowa is not going to vote for Bill Braley and vote for him a third time, that’s for sure.”

That “Bill” Braley reference was Romney’s way of highlighting First Lady Michelle Obama’s verbal missteps last Friday when she called Braley “Bailey” seven times at a rally for Braley in Des Moines before the crowd yelled out Braley’s name. Ernst, who spoke three times as long as Romney did this evening, urged the crowd of 150 to vote early and volunteer to seek out other voters.

Romney and Ernst plan to rally with supporter Monday in Cedar Rapids.