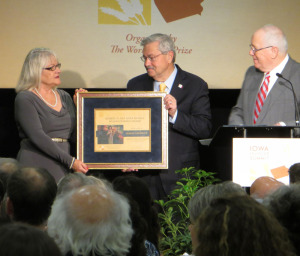 Governor Terry Branstad presented the award to Merry Fredrick at the Iowa Hunger Summit in Des Moines. The 66-year-old Fredrick retired at the end of last year after 14 years as executive director of Waverly-based Self-Help International.

She’s hoping the recognition will raise the operation’s international profile. “Self-Help International, a wonderful Iowa organization, now has the opportunity to be exposed to a lot of other people so that they can be a part of it and we can grow around the world to end hunger,” Fredrick said.

The organization also provides micro-credit loans to women for starting small-scale businesses. Fredrick said such loans should be available every country since women tend to use profits to provide for their children. Former Governor Robert Ray created the Iowa SHARES campaign in 1979 to send needed food and medicine to Cambodian refugees.