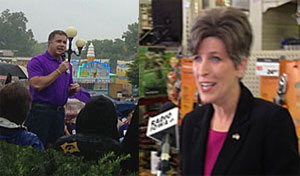 A shift among independent voters is making Iowa’s U.S. Senate race too close to call. Peter Brown is assistant director of the Quinnipiac University Poll, which found Republican Joni Ernst had 47 percent support and Democrat Bruce Braley had 45 percent.

“He seems to be doing better among independents and that has brought the race essentially to a ‘too close to call’ status,” Brown says.

A Bloomberg Politics/Des Moines Register “Iowa Poll” conducted early this month found nearly the same result, with Ernst ahead of Braley by just one point in that poll.

Quinnipiac’s more recent poll found a “12-point turn” toward Braley in the past four weeks among independent voters. Brown suggests another wild card in this Senate race is Governor Branstad. 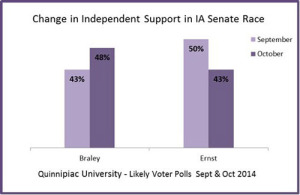 “Will his anticipated solid victory or maybe more than solid victory help drag Joni Ernst across the finish line, if he has coattails?” Brown asks.

The Quinnipiac University poll found Iowa’s Republican governor holds a 15-point lead over Democrat Jack Hatch. Only 10 percent of voters say they might change their mind on that race before they vote. The Quinnipiac poll was conducted over six days, starting last Wednesday and ending Monday. It has a margin of error of 3.2 percent.