You are here: Home / Crime / Courts / Babysitter sentenced to 100 years in prison for death of Orange City toddler 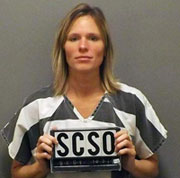 A northwest Iowa babysitter who admitted to authorities that she picked up a toddler and threw her because the three-year-old didn’t ask for help taking off her jacket will spend decades in prison.

Rochelle Sapp, the in-home day care provider who was charged with causing the death of an Orange City toddler last year, has been sentenced to 100 years in prison following a plea agreement announced this morning in Orange City.

The 34-year-old Sapp pled guilty to one count of involuntary manslaughter, a Class D felony, and one count of child endangerment resulting in death, a class B felony. Sapp also entered an Alford Plea to multiple additional acts of child endangerment. An Alford Plea is a guilty plea whereby the defendant doesn’t admit the criminal act, but acknowledges the prosecution has sufficient evidence to obtain a conviction.

The charges against Sapp stem from an incident in October of last year in which three-year-old Autumn Elgersma of Orange City suffered fatal injuries while in Sapp’s care.