You are here: Home / News / Donald Trump to headline King for Congress fundraiser in Iowa Saturday 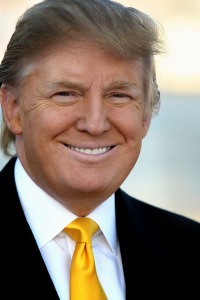 Businessman Donald Trump — the star of the reality TV series “The Apprentice” — is coming to Iowa this Saturday to headline a private fundraiser for Republican Congressman Steve King.

“I’ve known Steve for a long time and I’ve respected him and I respect his views very greatly,” Trump said during an interview with Radio Iowa. “He’s very, very strong on repealing and replacing ObamaCare and ISIS and so many other things — stopping flights in from west Africa, with the Ebola crisis, which is just common sense.”

Trump said “any and all flights” arriving and departing from west Africa should be halted.

“Ebola’s a disaster if it gets into the country,” Trump said. “…At this moment, over 150 people a day are coming into the United States from what they call ‘hot spots’…the areas that are really most strongly affected and you see what’s happened with just a couple of people in Dallas and it’s like turmoil and panic in Dallas and then you have a nurse that goes flying back and forth from Cleveland and now so many people could be — and maybe they won’t and hopefully they won’t — but they could be affected.”

Trump fueled speculation that he might run for president in 2012 by dispatching an aide to Iowa for a “fact-finding” mission in May of 2011. Trump on Thursday told Radio Iowa there’ll be a “big discussion” about the GOP presidential field for 2016 right after November’s election.

“We’re going to have some very good people…and lots of people, including me, will be making a decision after January, I would say, and it’ll be very interesting to see what happens,” Trump said. “I don’t see Mitt Romney because he had it won. I mean, it should have been won and something happened to him in the last moments of that campaign and he lost a race that absolutely should have been won, so, you know, that was very unfortunate, but he had his chance and, unfortunately, he blew it.”

Congressman King has had other possible 2016 presidential candidates like Texas Senator Ted Cruz and New Jersey Governor Chris Christie campaign on his behalf and King considers Trump’s trip a signal Trump is “testing” the idea of running for president.

“When people of that profile come to Iowa, they’re not telling us that they’re taking it off the table,” King told Radio Iowa.

King and Trump were both featured speakers at an event in New Hampshire this past April and King said that’s when Trump offered to headline a “King for Congress” fundraiser.

King’s fundraiser will be held late Saturday afternoon at a private home in West Des Moines.