You are here: Home / Agriculture / Gas prices drop below $3 in most parts of the state

Dropping oil prices are partly responsible for a drop of prices at the gas pump. Department of Agriculture analyst, Harold Hommes, says a lot of the state is seeing gas for under three bucks a gallon. “Right now we’re finding things are fairly varied. We do have some in the low three’s yet, but most of the gasoline has crossed the $3.00 mark and has fallen into that two-70 to two-90 mark,” Hommes says.

He expects prices to continue to drop. “I do look for that trend to continue, there’s a lot of downward pressure right now on crude right now from the general economy, and recently, European recession woes,” Hommes says. He says one of the biggest factors is the substantial build up of crude oil stores. “We are producing a lot of it, and most storage hubs are sitting on ample supplies and inventories.”

Switches in production to produce heating oil can make the price go up, but Hommes says that’s no long a factor. “The heating fuel production, it’s really already occurred. And I think the industry is ready to move that and has been moving it through pipelines. It’s pretty much placed where it needs to be placed for this winter,” Hommes says. 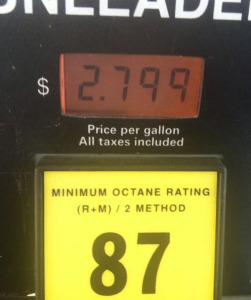 While the gas in your area may be under the $3.00, others may still be paying much more. Hommes says there can be wide variations on price, and sale philosophy and location are a couple of keys for the differences. “Some retailers have a bit wider margins. Some focus on narrower margins to attract customers in for other products,” Hommes explains. “But maybe the single biggest factor is location. When you’ve got to drive more than an hour to get your product from a terminal, those costs add up.”

He says competition can also be a factor in gas pricing. “And in most places in Iowa we do have that competition,” Hommes says. He says when there are a lot of stations in one area, it is hard to not match a station that drops its gas price, as customers can quickly move to the lowest priced station. Crude oil prices dropped nearly $6 or more this week — leading to the drop in gasoline prices.

The Triple-A average price for regular unleaded gasoline in Iowa Tuesday was $3.03. That is down nine cents from last week and down 25 cents from one year ago.