Governor Terry Branstad announced another component of the “Home Base Iowa” program today which allows Iowa colleges and universities become certified to educate veterans in an effort to lure them to the state. Branstad says the schools must follow certain requirements to become a Certified Higher Academic Military Partner or CHAMP.

“It will provide a series of on-campus veterans resources, demonstrate an understanding of the transitions that service members need to go through with practical solutions to help them make the change from military life to academic life, and demonstrate an awareness of the financial challenges that transitioning active service members may be experiencing,” Branstad explains.

Iowa National Guard Brigadier General Steve Altman says the addition of the certification program for colleges adds to what is already a good program. “I’d like to thank all the institutes of higher education for their efforts in making it really seamless for service members to bring their military transcripts to the state and get the maximum credit for it, allowing them to expedite their transition from schooling and getting degrees, to entering the workplace so much faster,” Altman says.

He says CHAMP will get the attention of military members who are leaving the service. “I believe that the education pillar will be a great boon for all of our service members and it will make Iowa the state of choice as they transition,” Altman says. 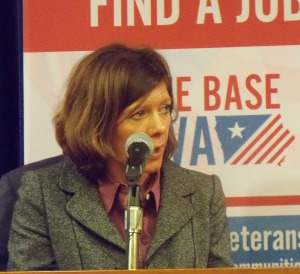 “Early registration, all types of things, taking a look at their record to make sure their academic credit transfers,” Anderson says. “All of those things can be really important and really critical for that transition for the military member.”

The governor says 495 veterans have been hired since Home Base Iowa was enacted in July. Anderson was asked if those are service members who would have returned to Iowa anyway. Anderson says she doesn’t have the exact breakdown of how many are Iowans, as she says employers don’t keep track of that.

“We are having veterans, transitioning military members, who could have considered going anywhere. And they’re seeing what we have to offer in Iowa now through so many of the facets of the Home Base Iowa Act,” according to Anderson. “But, now with the businesses making a committed effort to hire veterans — with 5,000 pledges to hire veterans. I would argue that we may be capturing Iowan’s back as well, but I would argue that that is a fantastic thing and that is something that we would certainly want.”

For more information on the program, go to www.HomeBaseIowa.org