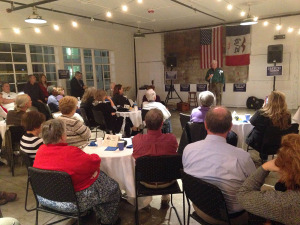 Branstad’s campaign in June claimed the web address for www.hatchvernon.com before Hatch’s campaign did and set up the website to criticize Hatch and Vernon as big spenders.

“I mean, it shows how inept his campaign is. His camp is so inept they couldn’t even get The Des Moines Register’s endorsement, let’s face it,” Branstad told reporters Monday, laughing.

The Des Moines Register endorsed Branstad in 2010, but this week the newspaper’s editorial board announced neither Branstad nor Hatch would get its backing in 2014. Hatch rejects the idea his campaign should be counted out because he’s raised far less money than Branstad.

“We’ve raised $2 million. He’s raised $10 million. He has another $5 million from outside sources from big money,” Hatch told reporters Tuesday night. “So if you’re judging this on money, if this is the threshold of politics that we’ve come to, then nobody will have a chance in the future, because Republicans are always going to have the big, special interest money.”

And Hatch discounts the polls that show him trailing Branstad by double-digits.

“We believe in the old style,” Hatch said. “People are going to now start making their decisions.”