You are here: Home / News / Tipton man cashes Powerball winner one day before his birthday 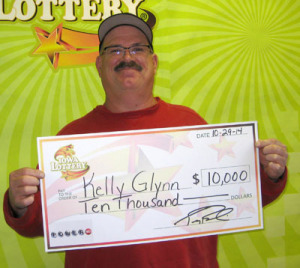 An eastern Iowa man has finally claimed a $10,000 lottery ticket that was purchased for a Powerball drawing back on January 22nd. For the past nine months, Kelly Glynn of Tipton says only he and one other person knew he was holding the valuable ticket.

“The only person who knew was my mom,” Glynn said. Even Glynn’s two children, ages 11 and 7, didn’t know. Glynn, who turns 48-years-old tomorrow (Friday), finally claimed the $10,000 prize on Wednesday. So, why did he wait so long?

“I just thought I’d save it until around my birthday,” Glynn said. “I didn’t know if I’d want anything or need anything. I just thought it’d be a nice birthday present.” Glynn purchased the winning ticket at the Family Foods store in Tipton.

Since May, a lottery poster has been hanging in the store, advertising the unclaimed prize. “Yep, I’ve been looking at (the poster) every time I go in there,” Glynn said. “They’ll be able to finally take it down.”

It’s the second time a sizeable winning Powerball ticket mystery has been solved in the town of Tipton this year. A $1 million winning ticket, purchased at a convenience store in Tipton last November, went unclaimed for several months. Iowa Lottery officials held a news conference in Tipton in May to spread the word about the unclaimed prizes.