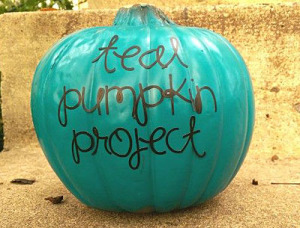 Halloween isn’t a very happy holiday for the estimated one in every 13 Iowa kids who have food allergies since they can’t partake in the annual ritual of gobbling piles of candy after trick-or-treating.

A central Iowa woman has launched a non-profit group that aims to raise awareness of food allergies during this holiday and year-round. Kelly Williamson, of Ankeny, has an eight-year-old son who has multiple food allergies.

“When he first starting going trick-or-treating, we would get the sad face and the tears when we took all of his candy away, but he has since learned that he doesn’t want to end up in the hospital,” Williamson says.

She founded Food Allergy of Iowa in 2011 as a way “to improve the quality of life to those affected by dietary restrictions.” She urges Iowans to consider giving Halloween treats that all kids can enjoy and to display a teal-colored pumpkin outside their home to send the message.

“The teal pumpkin signifies that there is a safe alternative,” Williamson says, “meaning, it’s not food-related, more along the lines of pencils or suckers. We’ve had everything from rulers to stickers, little toys, little trinkets.” There are eight common food allergies, but when it comes to candy, the main concern is around those that contain nuts, and most candy bars are ruled out.

The teal pumpkin movement started on the East Coast and she’s hoping it will catch on in Iowa. Williamson says, “It’s nice to know that person has taken the extra initiative to have something alternative for kids that can’t eat most of the Halloween candy.” So, just where do you get a teal pumpkin? They don’t grow that way. Williamson suggests buying a can of teal spray paint and simply painting your orange gourd. Learn more about the program at the Food Allergy of Iowa Facebook page.