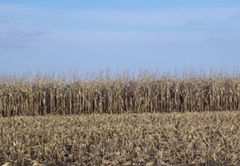 The lastest crop report shows 61% of the corn has been harvested.

Iowa farmers were able to get a lot of work done last week, according to the latest report from the Department of Agriculture. Sixty-one percent of Iowa’s corn acreage has been harvested, which is still 10 days behind the five-year average for this time of the season.

Robert Lynch farms just over 1,600 of land in north-central Iowa’s Humboldt County. He wrapped his field work over the weekend. “All of the corn is taken in, a little wetter than we wanted, but we finished it up figuring it wasn’t going to dry anymore anyway,” Lynch said.

Not willing to gamble on weather, Lynch marketed his corn — containing up to 21-percent moisture, about 5-percent more than optimum. “That basically went to the elevator, a lot of it, just getting rid of it and getting it out of the field before it falls over in the field,” Lynch said. “We put some in the dryer earlier. We filled the dryers a couple of times and then decided it was time to take it to town.” Lynch expects his federal crop insurance will make up for the disappointing market price, which is less than half of corn market prices earlier this year.

“Revenue insurance will kick in right now. Really, we’d have to have 220 bushels (an acre) corn in order not to have crop insurance probably,” Lynch said. As it stands, Lynch’s top yielding corn was 175 bushels per acre — far from compensating for the relatively weak market prices. According to Monday’s USDA Crop Report, 91-percent of Iowa’s soybean acreage is now out of the field.

Lynch is disappointed with his yields, ranging from 150 to 175 bushels per acre. He’ll rely on federal crop insurance to cushion his financial losses in selling his corn at prices less than half of what the market was paying earlier this year. Lynch says he would’ve needed yields closer to 220 bushels per acre to avoid using crop insurance.