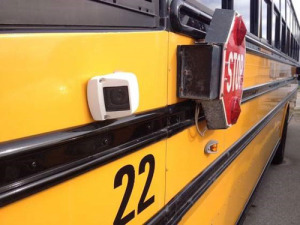 A camera on an Iowa City school bus.

School bus drivers across the state say too many motorists are illegally passing stopped school buses. This year, the Iowa City Community School District equipped all of its buses with exterior cameras and David Dude, chief operating officer for the district, told KCRG-TV that those cameras have already captured video of 282 cars making those illegal passes.

“It’s disturbing to me how many people will violate the stop arm of buses,” Dude said.

The cameras are mounted on each bus near the stop arm and clearly show drivers who ignore the extended stop sign and flashing red lights. “The cameras aren’t going to prevent somebody from violating a stop arm, but they’re going to allow us to enforce it easier. It’s going to provide more information to the police force and the county attorney,” Dude said.

Penalties in Iowa for passing stopped school buses have increased since a Worth County girl was killed in 2011 while trying to board a school bus near her home. The driver of the pickup in the incident was charged with vehicular homicide and is serving a 15 year prison sentence. Penalties for first time offenders include a minimum fine of $250, a possible jail sentence, and the loss of a license.