You are here: Home / News / Actress from Alfred Hitchcock classic ‘The Birds’ to speak in Omaha 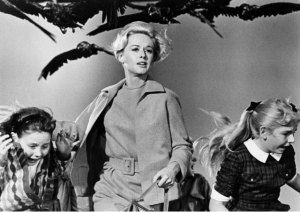 Tippi Hedren in a publicity photo for “The Birds.”

Iowans who love classic films from the 1960s will have the chance to meet the star of one of Alfred Hitchcock’s most famous movies tonight. Actress Tippi Hedren will be appearing in Omaha/Council Bluffs for a special showing of her first movie, “The Birds.”

Hedren says her personal and professional relationship with the legendary director has been the topic of speculation for many years. “Don’t believe everything you read,” Hedren says. “Sure, it was difficult. It was a difficult movie but my God, it was just the most exciting time of my life.”

One of the most horrifying scenes in the 1963 film was in the final minutes when Hedren walked into an attic and was attacked by a flock of birds. Hedren, who’s now 84, recalls it was a grueling scene to shoot for her, for the crew — and likely for the birds, too.

“They were hurling them at me and I just fended them off but it went on for a week which was absurd and senseless,” Hedren says. “Fortunately, I wasn’t hurt. I did get a scratch way too close to my eyes on Friday afternoon when they had me on the floor.”

Hedren, a Minnesota native, shot a second movie under Hitchcock’s direction, “Marnie” in 1964. She says she’s thankful Hitchcock gave her the start for her career but he also tried to ruin it by keeping her under contract when she wanted released. “He would become obsessed over his leading ladies and to be the object of someone’s obsession when you’re not interested is a horrible thing,” Hedren says. “It’s absolutely the most awful feeling to know you’re being followed, that you’re being watched.”

She went on to star in more than 80 films. Hedren will share more of her experiences prior to the showing of the film at Joslyn Art Museum in Omaha at 7 P.M.