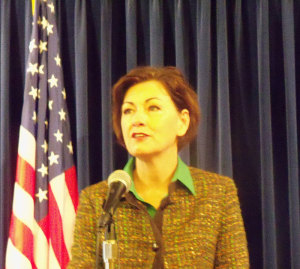 Lieutenant Governor Kim Reynolds met with the media alone today with the governor out of the country for a post-election vacation. Reynolds and the governor won re-election last week and saw a Republican surge in almost every area but the state Senate where the Democrats held onto a slim majority.

Reynolds says the path to gaining Republican control of the Senate was too narrow. “I think we probably needed to have more seats in play, but we’ll continue to do what we did over the last four years, and that’s work with both a Republican-controlled House and a Democratic-controlled Senate,” Reynolds says. “We’re going to put Iowans first and Iowa first. We are going to look for legislation where we will continue to build consensus.”

Reynolds was asked if raising the gas tax to help fund road repairs will be one of the issues they push. She says Governor Branstad has been pretty clear that the gas tax isn’t the only solution. “We know that it’s extremely important for Iowa’s economy that we have the money to sustain Iowa’s roads and bridges. It can’t just be just raising the gas tax, I don’t think that’s a sustainable measure, we know that that’s a declining revenue source,” according to Reynolds.

Reynolds says they need to look at several options and combine them in a bipartisan package that will increase revenue for road repairs in the long term. Reynolds says with the election of Join Ernst to the U.S. Senate and the body now in Republican control, there could be some federal options on road funding that also help the state. “Congress passed several measures for long-term road funding at the federal level that didn’t even get debated in the Senate. So, hopefully they can look at a long-term solution at the federal level, we can work with both parties at the state level, and look for a hybrid — several options that we can put together that do what we need it to do, that is improve the infrastructure in the state of Iowa.”

The governor will be on vacation through November 18th.