You are here: Home / Human Interest / Veterans look on as new members join the military 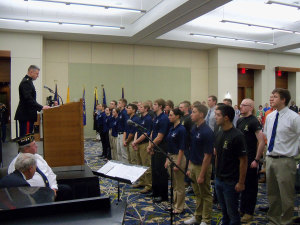 The state Veterans Day celebration in Des Moines Tuesday had the traditional ceremonies and also something new. Veterans of wars that had ended decades ago watched as Marine Corps Major, Sean Keenan swore in around two dozen new soldiers.

Keenan talked about the challenge ahead before swearing them in, saying he hands down “the legacy of the greatest fighting force the world has ever known.” He says the world continues to be a dangerous place, and they will be tasked with keeping America safe the same way the veterans of past conflicts have.

“It was all of those who have gone before you who stood watch over American to guard against threats in the dark. And they did so with overwhelming courage and character, they represented our country with pride and justice and we all welcome you to the armed forces of the United States military,” Keenan says.

He then led them in their oath to the country before turning them over as new service members. “Congratulations ladies and gentlemen, you are now inducted into the four branches of the armed service of the United States of America. And applause is appropriate,” Keenan says.

The new recruits were from the Des Moines area and many said they are entering the military to continue a history of service.

That’s Drake Allen’s reason for entering the Air Force. “My family has always been part of the military and I thought it would be really important to just put forth the effort to make America a better place,” Allen said.

Elizabeth Edder said the decision was easy. “This is going to be my life. I knew it from the minute I talked to recruiters, this is where I belong, this is what I’m meant to do,” Edder said. Edder hopes to become an officer in the Air Force.

All of the new recruits will now go on to do some more training for their particular branch of the service.