You are here: Home / News / Senator Grassley to vote for Keystone pipeline 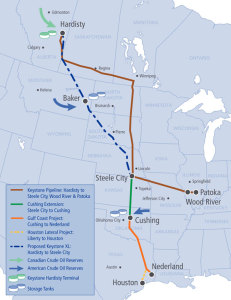 The U.S. Senate will vote today on the Keystone XL pipeline.

Iowa Senator Chuck Grassley says he’ll be voting today in favor of construction of the Keystone XL oil pipeline that will run from the oil sands in Canada to refineries on the Gulf Coast of Texas.

Vital sections of the pipeline through Nebraska, South Dakota and Montana have been on hold, awaiting approval, since 2008. Grassley, a Republican, says the issue deserves action that’s long overdue.

“It would transport underground rather than posing greater risk to the public, traffic and environmental safety that happens when you ship by railroad,” Grassley says. “We’ve had two or three fairly destructive and with many casualties, in the case of Canada, of these sort of rail accidents.”

The U.S. House passed the measure approving the pipeline last week though if the Senate should okay the measure, it’s unclear how President Obama will react. Grassley says the pipeline would help strengthen North American oil production. “The Keystone XL pipeline is an opportunity to advance U.S. energy security with a partnership with one

of our most stable trading partners in the world,” Grassley says. “Wouldn’t you rather get your oil from Canada than from the volatile Middle East?”

TransCanada has applied for a presidential permit to build the Keystone X-L pipeline from western Canada to Steele City, Nebraska. It would connect with the southern portion of the pipeline, which is operating from Cushing, Oklahoma to refineries along the Gulf Coast in Texas. The northern portion of Keystone XL is estimated to cost $5.4 billion. It would carry 830,000 barrels of oil sands crude -daily- from Canada to the refineries.

Iowa Congressmen, Tom Latham, Steve King — both Republicans — voted for the pipeline in the U.S. House, as did Democrat Dave Loebsack. Democrat Bruce Braley voted against it.