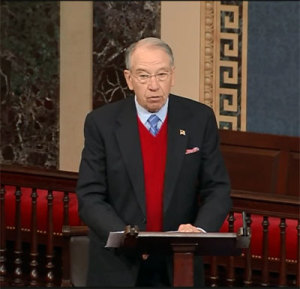 Iowa’s senior U.S. Senator Chuck Grassley gave a glowing tribute speech to the state’s junior and retiring Senator Wednesday. Republican Chuck Grassley spoke in honor of Democrat Tom Harkin on what was Harkin’s 75th birthday. Grassley has served with Harkin in the U.S. Senate for 30 years after both had served together in the U.S. House.

“Although some of our silver-tongued critics over the years may have ascribed Tom’s views as those of a bleeding heart liberal or mischaracterized mine as that of a cold-hearted conservative, we both know that our hearts have always been in the right place,” Grassley says. Grassley said neither one of them was born with a silver spoon in their mouths and they have worked to keep alive the dream of prosperity and the pursuit of happiness for hardworking Iowa families.

“It’s true that we have vastly different views on the government’s influence on America’s ladder of opportunity,” Grassley said, “However, we whole-heartedly agree that it is an honor and a privilege to serve the people of our state. For some reason, our respective reelections every six years have confounded political observers.”

Grassley says outsiders couldn’t understand how the state could elect two people from opposite sides of the political spectrum. “To explain, I think I don’t have to, because it is widely understood that Iowans aren’t casual political observers. Our electorate takes pride in retail politicking and its first-in-the-nation political caucuses. We certainly have given Iowa voters a night-and-day choice between these two U.S. Senators,” according to Grassley.

Grassley said Harkin will leave behind a legacy of fiery floor speeches, passionately delivered on behalf of individuals with disabilities, for Iowa farmers, for the elderly and child laborers. “To his credit, my colleague’s legacy reflects the priorities that he set out to achieve decades ago — to make a difference for those on the down side of advantage,” Grassley said.

Grassley became emotional near the end of his speech as he looked up and saw Harkin and spoke directly to him. “As you start life’s next chapter, may you enjoy the blessings of hearth and home, health and happiness,” Grassley said. “Although Tom is retiring from public office, I’m confident he is not retiring from serving the public interest. From one constituent to another, I thank you for a lifetime of public service. And I wish you good luck and Godspeed.”

Harkin is a Navy veteran who served 10 years in the U.S. House before being elected to the U.S. Senate. Grassley is 81 and was asked about retirement last year when Harkin announced he would not run again. Grassley said he plans to seek another term in 2016.