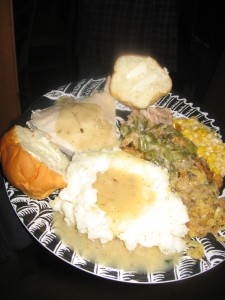 The American Farm Bureau Federation’s annual survey on the cost of serving a traditional Thanksgiving meal is out.

Iowa Farm Bureau director of research, Dave Miller, says you won’t have to find much more cash than you did last year to buy all the food for ten people . “The Thanksgiving feast is basically stable in cost at about $49.41 according to the American Farm Bureau study. We’ve been within about a 20-cent range on the cost of that meal for the last four years,” Miller says.

He says the increase is less than the cost of a postage stamp. “It’s up 37 cents from a year ago, it’s still actually cheaper than 2012,” Miller says. The checks the price of turkey, bread stuffing, sweet potatoes, rolls with butter, peas, cranberries, a relish tray of celery and carrots, pumpkin pie with whipped cream, and beverages of coffee and milk.

“The biggest ingredient is the turkey, and it was actually down 11 cents from a year ago,” Miller says. “The biggest upside was probably the sweet potatoes that were up 20 cents for three pounds of sweet potatoes, so up about three cents a pound.”

The turkey averaged $21.65 cents or $1.35 a pound. “Turkey production took a hit when corn prices were high coming out of the 2012 drought when corn prices were high, but turkey production is up on a national basis, and that’s part of the reflection of turkey prices, slightly lower this year,” Miller says. At around $49s for 10 people, the cost of the meal is $5s per plate. But Miller says this is a nationwide average cost and you may be able to find some local bargains.

“One of the things that shoppers report are there are places that if you spend 50 bucks or 100 bucks that the turkey may be free,” Miller explains. “So there are some real good promotions to get you in the store and with the use of coupons and some other things, the price of your Thanksgiving feast could be substantially less than five dollars per person.” This was the Farm Bureau’s 29th annual study of the cost of the Thanksgiving meal.