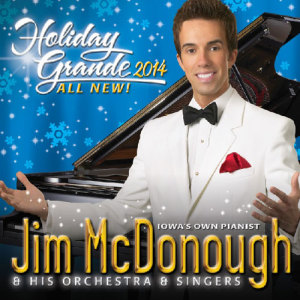 Eastern Iowa pianist Jim McDonough will open his holiday concert series this weekend in Cedar Rapids. McDonough is touring a half dozen Iowa cities this year on the 40th anniversary of Camp Courageous in his native Monticello.

Proceeds from the shows benefit the camp for people with disabilities. McDonough says this year’s concert is completely different from last year. “It’s important to me that we present something new and fresh because the audiences have made this a family tradition,” McDonough says. “Year after year, we see the so many of the same faces in the audience so it’s a brand new show every year.”

He says each show is a major touring production. “We have so many new, spectacular musical arrangements where I will be joined by my professional 14-piece orchestra, a cast of eight singer-dancers, a full stage set that’s brand new,” McDonough says. “I’ll be there with a 9-foot Steinway concert grand piano.”

He’s just released his 17th CD which contains 14 songs from 12 Tony-winning Broadway musicals. “It’s hard to believe it took this many CDs for me to record an album entirely dedicated to Broadway,” McDonough says. “Broadway is such a popular theme, I’ve been wanting to record an album dedicated to those wonderful melodies from the Broadway stage.”