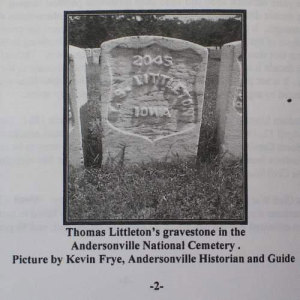 Fundraising is underway for a monument to honor six brothers from southeast Iowa who all volunteered for the Union Army and died during the Civil War. The Littleton brothers were from Toolesboro, a small town in Louisa County. One brother died in battle.

Four died of disease or accidents during the war and one died of his injuries shortly after he made it home. “He was in the battle of Harpers Ferry (in Virginia in 1862), captured, released, came home ill and died soon after,” says Tom Woodruff of Davenport, a member of the Louisa County Historical Society.

Woodruff discovered the story of these six brothers in a batch of old newspaper clippings four years ago and he’s been researching their history ever since.

“We were so fortunate in Iowa, Louisa County, to have these young men who gave so much,” Woodruff says.

The family was listed in the 1860 U.S. Census as “mulatto” to indicate they were of mixed race and Woodruff believes either abolitionists in the Louisa County area or Mormons in nearby Nauvoo, Illinois, helped the family settle in southeast Iowa in about 1840.

“We didn’t make that the emphasis of the story. It was the fact that six brothers came with their parents, some of them born on the way in Ohio, arrived here, were able to buy 200 acres of land and farm it in itself is a remarkable story,” Woodruff says. “What happened to the girls is quite a story.”

The brothers’ parents died before their sons went away to war and the six brothers left four sisters behind on the farm.

“We have found descendants of three sisters and, by the way, none of these descendants knew anything about their history,” Woodruff says. “The fourth girl, we’re not totally sure about her descendants or where she went.”

Woodruff says more than 50 descendants of Littleton sisters held a family reunion after he tipped them off about the six brothers who served and died during the Civil War. Will Thomson of Armadillo Arts in Iowa City has designed an 11-foot-tall black granite monument to honor the Littleton brothers.

“On one side there will be etched a drawing that shows six soldiers disappearing into the fog of war and underneath there’s the legend from Lincoln’s Gettysburg Address: ‘the last full measure of devotion,'” Thomson says. “And on the base there’s the name of the family, Littleton, and on the other side there’s a paragraph of text that tells their story.”

The site chosen for the monument is adjacent to a state historic site, the Toolesboro Indian Mounds and Museum. The spot is also along a highway, just two miles from the farm where the brothers lived. Organizers plan to plant six oak trees around the monument, one for each Littleton brother who died in the Civil War. Woodruff is working with a local high school to write a play about the brothers and he says their story is popping up on blogs, too. He hopes a novel will be published and a documentary will be made about the six brothers.

Woodruff and Thomson made their comments during a recent appearance on Iowa Public Radio’s “Talk of Iowa” program.