You are here: Home / Military / Iowan among Marines to be memorialized in Saigon 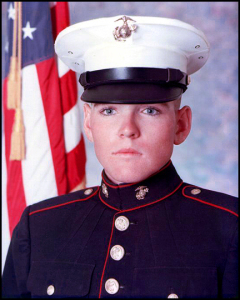 The last two Americans killed in the Vietnam War, including an Iowan, will be memorialized at the site of the old U.S. Embassy in Saigon. Marines Darwin Judge and Charles McMann were guarding an airport gate during the final evacuation when their post was attacked, making them the last combat deaths of the war.

Douglas Potratz is with the Fall of Saigon Marines Association and knew Darwin Judge, a native of Marshalltown. “As an organization, our main purpose is to memorialize the last two casualties, Judge and McMann. We thought it would be fitting if we would have a plaque memorializing them since they were the last two Marines and embassy guards to give their life,” Potratz said.

A bronze plaque will be dedicated at the site of the old U.S. Embassy, on the 40th anniversary of the fall of Saigon next April. Potratz’s wife and daughter were saved by Darwin Judge. “He put Becky, who was 3 years old at the time, on his back, took her piggyback style all the way up to the plane with my wife in tow, threw the bags up there and shipped them out. That was the last time I saw Darwin alive. He was my hero that day,” Potratz said.

The Embassy Guard unit that Potratz and Judge were part of is featured in the new documentary “Last Days of Vietnam,” which will be broadcast on public television next year.