You are here: Home / Human Interest / Winterset teen to be honored during Hawkeye/Cornhusker game 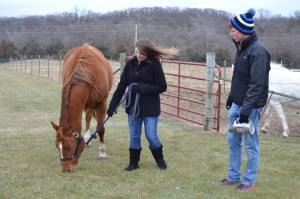 A teenager from south-central Iowa will be honored as a “Citizen Hero” during halftime of today’s Friday Iowa versus Nebraska football game in Iowa City. Austin Benson, 18, of Winterset is credited with saving the life of his friend Rachel Riley, after she was thrown from her horse on the 4th of July.

The animal rolled over Riley, causing the saddle horn to puncture her leg, severing an artery. “I ran down there, saw her in the pen, and I saw blood on her legs,” Benson said. “I jumped in there…and I saw a lot of blood on the ground and her leg was wide open. So, I took off my shirt and I pushed it on her leg, and I held it really hard. I just put as much pressure on it as I could.” A life flight nurse said if Benson hadn’t acted as quickly as he did, Riley might have died due to loss of blood.

The American Red Cross of Greater Iowa selected Benson to be recognized during today’s “Hy-Vee Heroes Game,” noting that Benson help keep Riley conscious until an ambulance arrived. “I sat there and I kept talking to her. She kept wanting to fall asleep and said she wanted to take a nap. I wouldn’t let her,” Benson said. “I made her stay awake and she just kept talking to me and looking at me. I calmed her down, she was freaking out when I got there. By the time the ambulance got there, she had calmed down enough to where she could talk and understand a little bit about what was going on.”

Benson and Riley have since become a couple. Benson said his girlfriend is doing well, and that the two went riding last week.

A Nebraska resident will also be recognized as a “Citizen Hero” also with Benson. Gene Willers is the president of the Midwest Bank Branch in Pilger, a town that was leveled by a tornado on June 16th. Willers locked eight people in the bank safe. It only locked from the outside, so he locked them inside and then went into the basement. The bank was destroyed, but everyone inside survived.