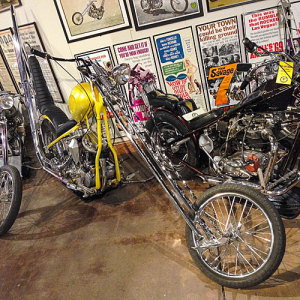 The National Motorcycle Museum is looking for more choppers like this one for an exhibit on the bikes.

The National Motorcycle Museum in Anamosa is looking for help in putting together an exhibit featuring bikes known as choppers.

Museum spokesperson, Mark Mederski, says choppers became a way for Iowans and others to build their own bikes after World War Two. “The period, I guess you’d say in the 50’s and 60’s where people got into extreme customizing of motorcycles first, with changing the steering head rakes, and extended forks and sissy bars and wild exhausts and such, both in American and British bikes and Japanese,” Mederski says.

Mederski says they are looking for anyone who is willing to lend their bike to fill out the exhibit. “We’d like to borrow motorcycles from May of 2015, roughly when the exhibit opens, for one year through May of 2016,” Mederski explains. “And then at our annual vintage rally event, which is June 20th, 2015, we’ll have a special class for chopped, bobbed and cut down machines.”

The exhibit won’t only feature the bikes, but also the other things that go with them. “We’ll also try and bring you some of the peripheral memorabilia, study the art of pinstriping, try to bring some leather jackets that fit the era, photographs, magazine covers and such,” according to Mederski.

He encourages anyone who is interested in lending their bike to contact the museum. “They can send email to the museum if they have interest in participating in the exhibition, and that email is: [email protected] They can also got to the website, which is: www.nationalmcmuseum.org and we’ve got information there on participation,” Mederski says.

The museum was founded in 1989 and in 2010 moved to a new building that doubled its space.