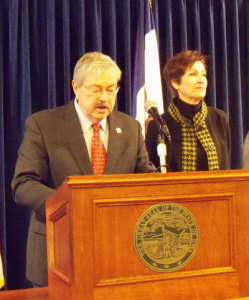 Governor Terry Branstad was asked once again today about the possibility of raising the gas tax and he stuck with his statement that there needs to be a mix of solutions to raise more money to improve roads.

The Republican says he has started talking with legislative leaders in both parties and isn’t going to lay out a specific plan at this time. “I’m not going to try to dictate what those elements should be. I want it to be truly a bipartisan consensus and get input from all four caucuses in the legislature. I think that is the best way to try and get something done,” Branstad says.

Branstad says more fuel efficient vehicles and the use of other fuels have cut the amount of gas tax taken in that is used to fund road repairs and that’s why there needs to be another solution. He says there are a few things he wants to see out of any plan that comes forward.

“I think it needs to be done on a pay-as-you-go basis, not with borrowed money, and it needs to be protected by the constitutional provisions of the Road Use Tax Fund so it can’t be used for another purpose,” Branstad says.

The governor says there’s a reason he isn’t naming the ideas he likes. “It would be a target to shoot at, and I think it would be much better if instead we approached it with an open mind and accepting input from all different persuasions on this issue,” according to Branstad. ” I’ve had some discussions, for instance, even with the people representing the truck stops who you would think generally would be against this. But they also have some ideas of some things other states of done that we also might consider.”

The governor will be thinking about trade for most of the rest of this week as he heads out on an economic development trip to New York City Tuesday. “We have a whole series of call, primarily in the insurance and financial services industry,” Branstad says. The state economic development director and insurance commissioner are going on the trip and will join the governor as they visit various companies. “I can’t divulge the names of the companies. Some of them already have operations in Iowa, we hope they will expand their employment base and make additional investments. Others we hope they will chose Iowa,” Branstad says.

The governor says the state already has a strong base in the insurance industry and financial services and they will be calling on those types of companies, and he says the insurance commissioner also has some additional meetings he got to along with the joint meetings.