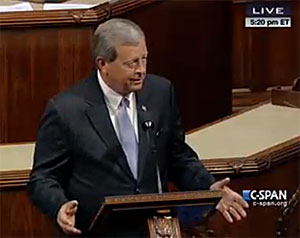 Colleagues in congress paid tribute to Republican Tom Latham Monday as he prepares to leave the U.S. House of Representatives after 20 years as a member of the institution.

“Everybody that comes to this place has their own style and their own way of getting things done,” King said. “But the people that have worked with Tom Laatham for these years know that it isn’t always an issue that’s run up to the flag pole. It doesn’t come necessarily with lights and blaring horns, but it gets done.”

Democratic Congressman Dave Loebsack of Iowa City called Latham a “humble Iowa guy” who has been a “model” of how to work in a bipartisan way.

“It seems as though our politics in America has just gotten uglier by the day, sometimes, and even in the middle of all of that Tom Latham has stood tall. He’s stood proud as an Iowan. He’s got a lot of common sense, like most Iowans do, and he works with the other side,” Loebsack said, “because he knows that the job is to get things done.” 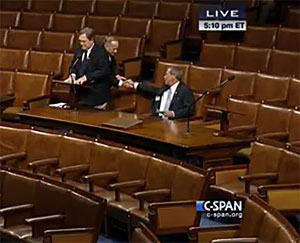 “I never learned a thing when I’m talking,” Latham said, pausing before adding: “You learn things when you’re listening to other folks and I think we should all maybe step back and listen to each other more.”

Latham’s best friend, House Speaker John Boehner, was on his way to the White House when Latham’s tribute was held on the House floor late yesterday afternoon. Latham said there could be “no better friend” than Boehner.

“The thing I’ll miss most are my good friends here and that part of it really is hard because it becomes an extended family over time,” Latham said.

Latham called serving in congress “the honor of my life.”

“I’m extraordinarily proud to have served here…and will always feel that my time was well spent here, but more so today, I’m excited about the future,” Latham said.

AUDIO of remarks on House floor from Latham as well as colleagues like King, Loebsack

Latham, who is 66, has represented more than 60 of Iowa’s 99 counties. Latham announced last December that he would not seek reelection and is looking forward to spending more time with his wife, children and grandchildren.